Currently, Dr. Abdallah is an Associate Professor of Psychiatry at Baylor College of Medicine, and the Director of the Core for Advanced MRI.

The Best Negative Data Prize is awarded to the researcher or research group whose neuroscience study best exemplifies data where the outcomes do not confirm the expected results or working hypothesis.

In the case of Dr. Abdallah’s work, the results contradicted the expected hypothesis that a particular pathway in the brain, mTORC1, mediates the antidepressant effects of ketamine, which preclinical research had strongly implicated earlier.

In fact, Dr. Abdallah’s study showed that when rapamycin—a mTORC1 inhibitor—was given prior to ketamine, not only were the rapid antidepressant effects of ketamine not reduced but the rates of remission and response were increased two weeks following treatment. Currently, ketamine must be infused two to three times per week to afford clinical benefit, which is not ideal for patients.

“This methodologically sound paper advanced the field significantly by an unexpected finding contrary to the hypothesis that also has translational implications. It thus epitomizes the kind of research the prize wants to highlight,” said Andreas Meyer-Lindenberg, M.D., the chair of the ECNP awards committee and editor in chief of the societies’ open access journal Neuroscience Applied. 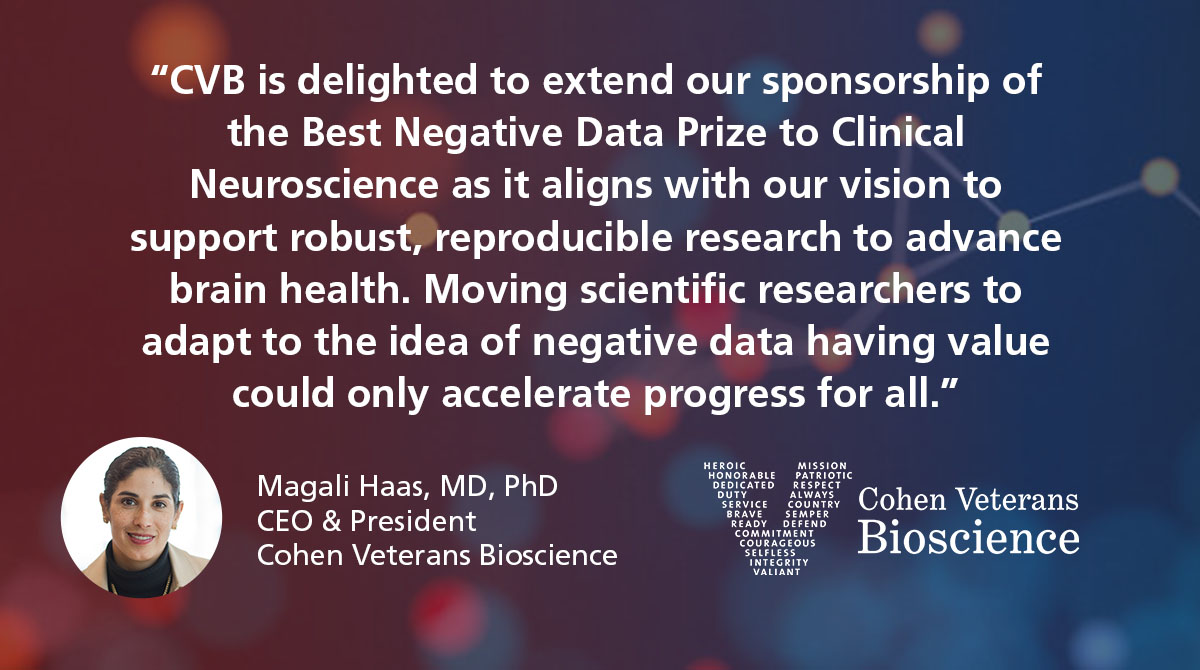 The purpose of the unusual award is to incentivize researchers to publish negative findings to demonstrate that all data is worthy for the scientific process. The prize aims to initiate a paradigm shift in which negative data are valued according to the same standards as positive data.

The Prize was awarded to Dr. Abdallah for his paper titled Modulation of the antidepressant effects of ketamine by the mTORC1 inhibitor rapamycin, which was published in the February 24, 2020, issue of Neuropsychopharmacology.

“CVB is delighted to extend our sponsorship of the Best Negative Data Prize to Clinical Neuroscience as it aligns with our vision to support robust, reproducible research to advance brain health. Moving scientific researchers to adapt to the idea of negative data having value could only accelerate progress for all,” said Magali Haas, MD, PhD, CVB’s President and CEO.

The award, presented at the 34th ECNP Congress Hybrid, is a monetary prize of 10,000 (ten thousand) Euro, made available through the generous sponsorship of Cohen Veterans Bioscience. The prize was awarded by Dr. Chantelle Ferland-Beckham, CVB’s Director of Policy and Advocacy and a member of the GPDF Steering Committee who initiated the prize.

The European College of Neuropsychopharmacology (ECNP) is an independent scientific association dedicated to the science and treatment of disorders of the brain. It is the largest non-institutional supporter of applied and translational neuroscience research and education in Europe.